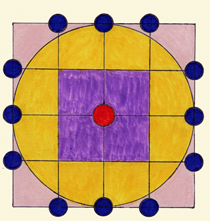 Acupuncture is a very ancient form of healing which predates recorded history. The philosophy is rooted in the Taoist tradition which goes back over 8000 years. The people of this time period would meditate and observe the ﬂow of energy within. They were also keen to observe man’s relations with nature and the universe. There were many ages of this period, but the most legendary was Fu Hsi, who lived in the Yellow River area of China approximately 8000 years ago. By observing nature, he formulated two symbols, a broken line and unbroken line. These symbols represented the two major forces in the universe – creation and reception – and how their interaction forms the physical realm. This duality was named yin-yang and it represents the back-bone of Chinese Medicine theory and application. Fu Hsi then discovered that when yin-yang fuse, a creative action occurs, and this gives birth to a third aspect. This aspect is the Trigram which is made up of a combination of three broken and unbroken lines. Fu Hsi then pondered on how there are eight combinations of Trigrams and this led to the 64 hexagrams of the I-Ching (Book of Change). The I-Ching shaped the thinking for years to come and every inﬂuential book on Chinese Medicine is based upon its fundamental philosophy.

The most signiﬁcant milestone in the history of Acupuncture occurred during the period of Huang Di -The Yellow Emperor (2697-2597). In a famous dialogue between Huang Di and his physician Qi Bo, they they discuss the whole spectrum of the Chinese Medical Arts. These conversations would later become the monumental text – The Nei Jing (The Yellow Emperors Classic of Internal Medicine). The Nei Jing is the earliest book written on Chinese Medicine. It was compiled around 305-204 B.C. and consists of two parts: 1. The Su Wen (Plain Questions) -9 volumes – 81 chapters. The Su Wen introduces anatomy and physiology, etiology of disease, pathology, diagnosis, differentiation of syndromes, prevention, yin-yang, ﬁve elements, treatment, and man’s relationship with nature and the cosmos. 2.: The Ling Shu (Miraculous Pivot, Spiritualb Axis )- 81 Chapters The Ling Shu’s focus is Acupuncture, description of the meridians, functions of the zang-fu organs, nine types of needles, functions of the acupuncture points, needling techniques, types of Qi, location of 160 points.

Approximately 1000 BC, during the Shang Dynasty, hieroglyphs showed evidence of Acupuncture. Bronze needles were excavated from ruins, but the bian stones remained the main form of needle. During the Warren States Era (421-221 B.C.) metal needles replaced the bian stones. Four gold needles and ﬁve silver needles were found in an ancient tomb dating back to 113B.C..The Miraculous Pivot names nine types of Acupuncture needles. The Historical Records notes many physicians practicing Acupuncture during this time. Another milestone for this period was the compilation of the Nan Jing (Book of Difﬁcult Questions). The Nan Jing discusses ﬁve element theory, hara diagnosis, eight extra meridians, and other important topics.

From 260-265 A.D., the famous physician Huang Fu Mi, organized all of the ancient literature into his classic text -Systematic Classics of Acupuncture and Moxibustion. The text is twelve volumes and describes 349 Acupuncture points It is organized according to the theory of: zang fu, Qi and blood, channels, acupuncture points, and clinical application. This book is noted to be one of the most inﬂuential text in the history of Chinese Medicine.

Acupuncture was very popular during the Jin, Northern, Southern, Dynasties (265-581A.D.). For generations the Xu Xi family were known as the experts in the art of Acupuncture. During this time period important texts and charts enhanced knowledge and application.

Acupuncture experienced great development during the Sui (581-618) and Tang (618-907) Dynasties. Upon request from the Tang Government (627-649A.D.), the famous physician Zhen Quan revised the important Acupuncture texts and charts. Another famous physician of the time, Sun Simio, wrote Prescription with a Thousand Gold for Emergencies (650-692). This text includes data on Acupuncture from various scholars.

During this period, Acupuncture became a special branch of of medicine and practitioners were named Acupuncturists. Acupuncture schools appeared, and Acupuncture education became part of the Imperial Medical Bureau. During the Song Dynasty (960-1279), the famous physician Wang Weiyi wrote, The Illustrated Manual on Points for Acupuncture and Moxibustion. This book included the description of 657 points. He also casted two bronze statues on which meridians and points were engraved for teaching purposes.

The Ming Dynasty (1568-1644) was the enlightening period for the advancement of Acupuncture. Many new developments included: 1. Revision of the classic texts. 2. Reﬁnement of Acupuncture techniques and manipulation. 3. Development of Moxa sticks for indirect treatment. 4. Development of extra points outside the main meridians. 5. The encyclopedic work of 120 volumes- Principle and Practice of Medicine was written by the famous physician Wang Gendung 6.1601 – Yang Jizhou wrote Zhenjin Dacheng ( Principles of Acupuncture and Moxibustion. This great treatise on Acupuncture reinforced the principles of the Nei Jing and Nan Jing. This work was the foundation of the teachings of G.Soulie de Morant who introduced Acupuncture to the European community.

Acupuncture was used exclusively during the Long March (1934-35) and despite harsh conditions it helped maintain the health of the army. This led Mao Zedong, the leader of the Communist Party, to see that Acupuncture remained an important element in China’s medical system. In 1950 Chairman Mao ofﬁcially united Traditional Chinese Medicine with Western Medicine, and acupuncture became established in many hospitals. In the same year Comrade Zhu De reinforced Traditional Chinese Medicine with his book New Acupuncture.

In the late 1950’s to the 1960’s Acupuncture research continued with further study of the ancient texts, clinical effect on various diseases, acupuncture anesthesia, and acupuncture’s effect on the internal organs. From the 1970’s to the present, Acupuncture continues to play an important role in China’s medical system. China has taken the lead in researching all aspects of acupuncture’s application and clinical effects. Although acupuncture has become modernized, it will never lose its connection to a philosophy established thousands of years ago.

Acupuncture History was last modified: May 25th, 2021 by admin